Let's make our own bull run!

AT&T and Verizon at Bargain Prices!

You are looking at two big bell companies that will continue to thrive through the recession.  Both give a dividend of 6+% and both have EPS.  I consider them to be Warren Buffet-like stocks.  Looking at the results, they have both increased the EPS as the years have progressed.  AT&T has increased net income year-after-year.  Even though their stock prices have barely moved for the past 5 years their dividend has increased and they continue to be profitable.

I consider them both to be safe bets.  Why hold a bunch of cash in the bank when you can be getting a safe 6% dividend?  You also help stimulate the economy 😉

Short-term things to consider: AT&T has continued to get deals with Apple.  They will be the exclusive provider of 3G for the iPad.  This is a big win as the iPad is a GSM made table.  In the 3rd quarter 2010, Verizon and other phone networks should be getting the iPhone.  This is not for sure as their has been a good relationship of AT&T and Apple. 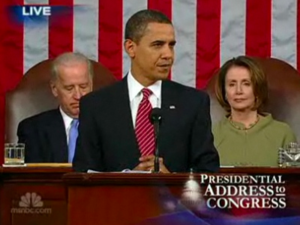 Obama is talking currently in his State of the Union address.  He’s endorsing a lot of spending programs to stimulate the economy.  He wishes to cut taxes for small businesses and large businesses alike.  He will give incentives for companies to move their offshore businesses in-house.  He also re-iterated his commitment to alternative energy.  This includes solar, wind, and nuclear energy.

He stated to continue the clean air act that we needed better clean energy programs.  The first topic he stated was building more nuclear energy plants.  I already have endorsed two companies that look good for this, EXC and USU.  Both companies have been dropping since their has not been any news on nuclear programs, but Obama has finally rung the bell to nuclear.  There will be loan funding for nuclear plants in the future and I believe these two companies are great plays.  Exelon has multiple nuclear power plants already in the United States.  They are a profitable nuclear energy company.  Obama would want more of these plants to bring more jobs in the US.  He knows infrastructure will be important to moving forward.  Look for them to continue to grow in the future.

USU, USEC, is a play on the government funding.  They have already been given exclusive access to old nuclear warheads to extract uranium.  They have also been doing extensive R&D to create new nuclear power plants.  I think this company is in great position to be given loan fundings. They already have done their research to create the next nuclear plants through their American Centrifuge program.